In T2’s Atlanta office, the availability of the customizable, automated data flow procedures, and of geolocation in particular, created an opportunity to work for the Georgia Department of Transportation (GDOT) in an entirely new capacity, expanding subcontracted services in a way that amounts to a new business within T2’s existing business model.

“With GDOT our scope is broadly defined,” explains Utility Coordination Manager Kevin VanHouten. “The key phrase is “other professional services as requested” so when I identified a need for better routing of field permit inspectors, GDOT was open to a proposal.”

Like all DOTs, GDOT controls access to its many miles of right-of-way and, since most right-of-way is also, typically, the location of various utilities in trenches and on poles, this means more or less constant interaction with utility companies via permitting for utility improvement or maintenance projects. In 2019, the system for permitting and project inspection was 15 years old, and presented several challenges:

• There was no central, updatable database or spreadsheet that could tell managers, at a glance, utility project type or status, or even what utility projects were ongoing in their districts at any given time. “There were designated area permit inspectors, covering 4-6 counties and updating spreadsheets according to their own systems,” says VanHouten. “But the permit inspectors tended to have their own methods and they weren’t updating to a state-wide system. So basically, if a district manager needed to know what was going on, or got calls complaining about utility work, he had to get on the phone and chase down the permit inspector to get answers.”

• The aging, stressed permitting system was failing to capture a lot of the value inherent in a permitting process. For example, because project inspection was spotty at best, there was no way to know if project quality was up to GDOT standards. And it was well-known that required ancillary maintenance, such as removal of redundant utility poles, was not being done alongside permitted utility work.

• The permitting and inspection workflow was very convoluted. “Basically, the inspectors would just ride around in their district, looking for projects that popped up, or responding to phone calls,” VanHouten explains. “There was really no internal GDOT system for updating permitted projects by district, and the inspectors were using legal pads or homemade spreadsheets to keep track. It was just a difficult system for everyone concerned.”

Van Houten began by working with Susan Port to digitize all existing GDOT forms for use on tablets and smartphones, to funnel existing permitting data streams into a web-based ’portal’ for use by T2 staff and GDOT managers, and to format weekly and monthly status reports, also accessible to T2 and GDOT. This initial setup work, accomplished in two weeks, was enough to begin assigning T2 field staff to inspect all permitted projects (15-20 new permits are issued per week in most offices) in the several assigned districts.

This work was, more or less immediately, perceived as a big win for all concerned. Project quality and safety demonstrably improved as inspectors checked in with utility firm project managers weekly, offering assistance where able and routinely enforcing established standards for work and for traffic control. Project status was updated daily or weekly, keeping managers at all levels informed without phone calls or field visits. And, interestingly, Georgia’s highways even began to look more attractive.

“GDOT has a ‘clean and green’ policy for their highways,” VanHouten explains. “For example, if new poles go in, for example, sometimes the old poles are left in and become an eyesore and unsafe. That’s actually addressed in the permitting regulations—when doing permitted work in a county, the utility firm is supposed to do maintenance work as needed within the particular highway right-of-way, from county line to county line.” If this work had been done routinely, it would not have been particularly onerous. But since the provision had rarely been enforced, there was a substantial backlog of utility maintenance issues that needed to be addressed, and T2 field crews began to routinely locate and log them, with the Builterra app, as they went about their regular inspection duties.

Meanwhile, VanHouten spoke at several quarterly meetings between GDOT district managers and utility firms operating in the districts, explaining the new enforcement policy. “When we first brought it up, of course there was a little resistance from the owners—this was zero revenue work that they’d never really been asked to do before,” he says. “But when we explained that my guys (T2 staff) would be doing all the upfront work, identifying problems and providing locations, photos, and tag numbers, and that we’d be working with them to address this backlog incrementally, not all at once, they appreciated our help and didn’t grumble too much. We learned that most of them don’t have a system for this either, and appreciated the organizing work being done for them.”

Results were immediate, tangible, and a little dramatic; in one district, for example, 500 poles were identified as redundant and in the first six months the enforcement system has been in place, 25% have already been removed. Recently, T2 has identified similar maintenance and permitting issues affecting railroad crossings and may begin managing that work on behalf of GDOT as well. “Tree trimming is one of the big issues here,” VanHouten notes. “Sometimes just one side of a tree will be trimmed, making the tree more likely to fall in an ice storm, and there was really no way to address that. Now, my guys have started noting these kinds of problems as they go about their other work, and putting them into Builterra for management.”

It’s important to note that use of Builterra has automated what is traditionally one of the most difficult aspects of field crew work—figuring out where to go each day. Crew chiefs update the system daily and check in weekly for automatically provided reports on the newly issued permits, with locations, that become part of their weekly assignments. And completed projects are automatically removed from their weekly work.

And crucially, all the geolocated, photographed, issues (of any kind) logged by T2 crews in the course of their daily work are incorporated into the weekly assignment reports, and are easy to check in on as crews drive from one site to another. Making drive time useful and productive has always been a goal of office managers, and Builterra geolocation makes this difficult task simple and nearly automatic.

Written by Angus Stocking who is a former licensed land surveyor who has been writing about infrastructure since 2002. 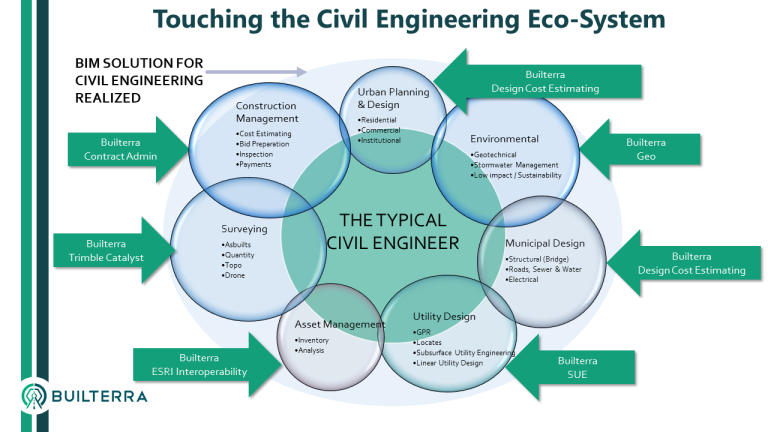